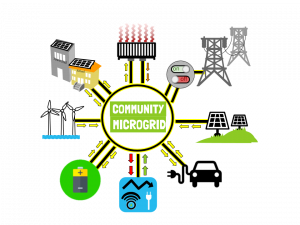 A microgrid is a localized grouping of electricity sources and loads that normally operate connected to and synchronous with the traditional centralized grid (macrogrid), but can disconnect and function autonomously as physical and/or economic conditions dictate.

These self-contained electricity distribution systems, typically within a larger electrical distribution network, have “islanding” capability and have the capability to coordinate and distribute energy supplied from one or more generation sources to a network of users in a spatially defined area.

As the microgrid market and enabling technologies continue to evolve and expand, the NYS SmartGrid Consortium is committed to serving as a resource and advocate.  Microgrids would make feasible large community energy projects such as biomass plants, banks of fuel cells, and neighborhood arrays of solar panels or wind turbines.

When a blackout occurs, rooftop solar panels often go dead too, since most people have no way to store electricity on-site. A microgrid might enable the panels to keep working. But the really interesting question is where that power would go. Would you use it yourself or dedicate your trickle of power to the police station?

Conventional electricity is delivered through a tangled network of substations and feeders. Microgrids could use smart inverters –newer, more adaptive tools for converting between DC and AC power– and sophisticated software to allow a community to deliver and retrieve power without disturbing the grid’s delicate voltage balance.

Microgrids could make the power system more efficient (by preserving the up to 15 percent of electricity that can be lost on long-distance transmission lines and local feeders) and less polluting (by reducing reliance on carbon dioxide-spewing power plants).

For the local microgrid to provide serious backup during a power outage, there would have to be storage. That could take the form of clean fuel or large, expensive batteries–or even those batteries-on-wheels otherwise known as electric cars. This so-called vehicle-to-grid solution could serve as a giant, flexible, and networked storehouse of energy for the neighborhood.